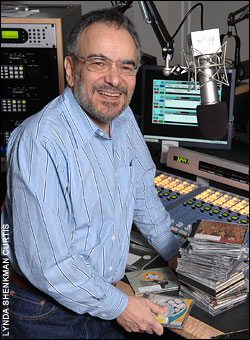 I learned over the weekend that Pete Fornatale, perhaps the greatest rock DJ of all time, died at the too-young-age of just 66. I wasn’t quite a listener in the real heyday of free-form FM radio back in the late 1960s. My listening days began around 1971 or so. And I didn’t discover Pete until later in the decade. But when I did finally hear him on WNEW (I was initially a WPLJ fan), I became an instant fan. He had a passion for the music that leapt from the radio’s speakers, but there seemed to be no ounce of ego about him. Just a love of the music and the musicians. The combination of soulless corporate ownership of media (continually shuffling the formats of radio stations to squeeze every ounce of profit from the airwaves) and my moving to Vermont in 1990 meant that it had been a long time since I’d heard Pete on the radio. He still had a weekly show on his old alma mater radio station, WFUV from Fordham University, and occasionally I’d hear a piece of the show on satellite radio or streaming online. And the soothing, enthusiastic voice sounded just the same. Full of life and appreciation for the music and the people making it. Those moments were like a little time machine, bringing me back to my youth, when music seemed to be an expression from the soul and not merely a business. I’m sure I was naive back then. The Rolling Stones were into the money as much as any artist today. But it didn’t feel that way. Pete Fornatale always respected the songs, and always gave you more information about them, putting them in a context that helped me to appreciate them and the people making them.

I won’t say that I’ll miss Pete Fornatale, because I already missed him and the radio that he helped create. But I am very sad that he won’t be on the airwaves (do we still have airwaves?) any longer, making new shows and keeping the golden age of FM rock radio alive.

View all posts by Steve Zeoli